Itstarts in the north with the Guanacaste “Cordillera” (mountain range), continues with the Tilaran Cordillera (location of Monteverde and Arenal), the Central Cordillera (Irazu, Poas, Braulio Carrillo), and finishes with the southern Talamanca Cordillera (the highest in the country).Even though Costa Rica is a small country, it has great biological and habitat diversity due to the convergence of two hemispheres, two oceans, and its varying geography. This creates wonderful changing views for travelers. There is a chain of mountains that forms a back- bone down the length of Costa Rica.

While the Pacific coastline is almost 780 miles (1,254 km), the Caribbean is only 132 miles (212 km). Hilly peninsulas are settled in the Pacific coast. There are two large gulfs, and many small coves and bays. Two major commercial ports are located in the Pacific: Puntarenas and Puerto Caldera. On the Caribbean, there is a natural harbor in the Moin – Limon area. It is the largest area of lowland plains (about one-fifth of Costa Rica), which stretches back from the northern coastline almost to Limon.

Costa Rica lies in the tropics between 8 and 11 degrees north of the equator. You might expect moderate temperatures, but the rugged mountain chain’s creates many microclimates. Most people are surprised to learn that frost and ice can occur on some of the loftier peaks, such as Chirripo. Temperatures are somewhat higher on the Pacific side than on the Caribbean (at the same elevation) because there are more clouds on the Caribbean watershed year-round. At sea level on either side, the annual average is always above 75°F (24°C). Some of the highest peaks average 54°F (12°C), though temperatures there can fall below freezing.

There’s no spring or fall in Costa Rica. The seasons are called verano (summer) and invierno (winter), although they’re more likely to be a dry season (from December to April) and a rainy season (from May to November). Difference in daily temperatures averages 14°F to 18°F (8°C to 10°C). From November to January, there are cold breezes from the north funnel and through the mountains of North America, causing a little down in temperature. This is one of the few countries in the world in which polar air gets this close to the equator. The warmest months are 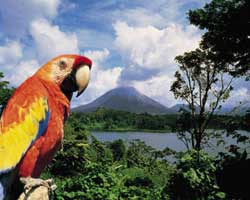 March, April, and May, and the wettest months are September and October. Rainfall amounts vary from less than 59 inches (1500mm) to more than 190 inches (4800mm) during these months. The country’s average rainfall pattern is in the range of 79 to 158 inches (2,000 to 4,000 mm). Precipitation can come in the form of a tropical downpour with impressive lightning and thunder (aguacero), steady rain, or the less common, a continuous light rain for several days (temporal).

Even in the rainy season, rain will not fall during the whole day, every day. It usually begins in early afternoon in the Central Valley and other highland areas, but later in the afternoon in the Pacific lowlands. Each season has its own beauty and unique characteristics. In wetter times the flora is profuse, with a vibrant life that gets into the soul. In the dry season the background is perfect for orchids, bougainvilleas, reina de la noche (queen of the night), as well as for colorful trees that flower only then.

Costa Rica can boast that it is the country with the highest percentage (25%) of its territory designated as protected areas: Forest Reserves, Biological Reserves, Nature Shelters, and of course, National Parks. These is another of the good reasons why many Europeans and North Americans, further than coming to travel, have made this land their home, being nowadays around 1% of the Costa Rican population.

Next to El Salvador Costa Rica is one of the smallest republics on Central America , lying between latitudes 8°03’ & 11°13’North latitude, & longitudes 82° 32’and 86°West. It borders with the Caribbean to the east and the Pacific Ocean to the west, it has a total of 1,290 kilometersof coastline, 212 kilometers (132 mi) on the Atlantic coast and 1,016 kilometers (631 mi) on the Pacific Coast. The pacific coast presents a series of irregularities like peninsulas, gulfs and bays. This circumstance facilitates the establishment of harbor zones and tourist development. On the other side, the coast of the Caribbean is regular, but inappropriate for this type of facilities.

Costa Rica also has several Islands. CocosIsland is a paradise of sea nature wonders and is located approximately 300 miles from the main land of the port of Puntarenas.CocosIsland has an area of 24 square kilometers. The largest island of Costa Rica is Isla Calero with an area of 151.6 square kilometers. Costa Rica is also known for the protection of its natural resources with more than 20% of its territory being part of its protected area system.

Since its origins as an isthmus territory, it has been a biological bridge where species of flora and fauna coexist. They belong to the NeArctic, the Neotropic and some of the West Indies regions. Due to this biodiversity some life zones have existed, including coastal landscapes at the sea level and also some desert landscapes on the 3,000 altitude meters.

The biodiversity allows the country to have an internal study of about 360 different species of reptiles and amphibious (150 amphibians and 210 reptiles), approximately 850 species of birds (625 nest and 225 are migratory), more than 205 species of mammals, including bats and other non- flying mammals.

This amazing country is the perfect getaway for those that want to relax close to nature. If you would like to see some sample vacation packages please visit:

Here, geography constricts a breathtaking amount of plant and animal life within a modest area of 19,563 square miles (50,900 sq. km), an area comparable in size to Denmark or West Virginia. Within this diminutive nation is found an astonishing five percent of the world’s biodiversity, including more than 800 species of ferns, 1,000 of orchids, 2,000 kinds of trees, and 200 species of mammals.

Both coastlines of Costa Rica have an abundance of beaches, though the Pacific strands are generally both less developed and less spacious. Between the coasts, the interior of the country is shaped by four cordilleras, or mountain ranges, which run from North to South. The capital, San Jose, rests roughly in the nation’s center, settled within a highland valley. Cascading down to the Caribbean from the central mountains are Costa Rica’s many great rivers, including the Reventazon. The Pacific side is marked by two broad peninsulas that hook out into the Pacific, the Nicoya and the Osa. It is a geographic curiosity that their shapes are almost identical, the Osa being a smaller rendition of the Nicoya.

Costa Rica’s climate is renowned as an atmospheric treat. Mild subtropical conditions prevail year-round, and discomforting temperature extremes and prolonged periods of gray are practically nonexistent. Temperature varies mainly according to elevation, the higher the cooler. The brunt of the rainy season lasts from May through November, while a brief dry spell pays a visit from February to April. Costa Rica’s rain falls mainly on the Caribbean coast, giving the Pacific a much more arid climate.

Costa Rica has the largest percentage of protected areas in the world – about 20% of Costa Rica’s territory is constituted as National Park or Reserve. Most National Parks and Reserves are easily accessible from anywhere in the country, making Costa Rica the perfect destination if you want to be surrounded by nature. Entrance fees to the National Parks range from $7 to $15 per person. Read more about Costa Rica National Parks.

Costa Rica has become one of the most popular destinations for traveling surfers worldwide. Take a trip to Costa Rica and you will quickly see why – great weather year-round, warm water, friendly people and millions of surfs breaks with waves coming from all directions on two coasts. Check out our complete Costa Rica Surfing Guide.

The most widely spoken language in Costa Rica is Spanish (97% of the population); although there are other native languages used mostly within the indigenous reserves. Many businesses, in and around San Jose, and resorts throughout the country have employees who also speak English.

It is 110 volts. Plugs are two pronged without the grounding prong.

The Colon (¢1.00) is the national currency of Costa Rica. The exchange rate against the US dollar can vary day by day, which is why we suggest to exchange money at the National Banking System.

Automated Teller Machines (ATM’s) can be easily found in most populated areas of Costa Rica. Most international credit cards are accepted throughout the country: Visa, Master Card and American Express.

Most restaurants will include a 10% service charge at the bill. Taxi drivers generally do not receive a tip. If you are satisfied with the service you receive, hotel maids, tour guides and drivers would appreciate a tip.

Embassies of different countries of the world’s located Costa Rica